When I first read Facing Mount Kenya by Jomo Kenyatta, I was in distress, for it was pretty clear to me that the culture Jomo Kenyatta wrote about was based on treachery, not only against a people, or against earth – (the land and environment) it was a book that arrogantly dismissed the female. I had found the book in my Father’s library as a curious 11 year old, but even then it did not sit right with me, for I had listened well to the stories told to me, first by my paternal great-grandmother and later, my grandfather. There were also strange oddities that I could not quite put my young fingers on, so I set it aside and began to delve deeper into whom I was, as a Kenyan, as an African, as a Female, and as a member of the Kikuyu Tribe. I have read hundreds of other books, explored his thesis, discussed and studied the issues I write about below with countless men and women from the Kikuyu tribe, and listened and to many non-Kikuyu, Kenyan men, and women.

Years later I am confident and unapologetic enough to use his book to prove that Kenyatta and his writers (or could it be that the authors manipulated Kenyatta deliberately? You decide after this) – used “Facing Mount Kenya” as the key anthropological thesis on which the culture of the Kikuyu tribe may gain its’ insights. But not only that, the book was used to wipe out and conceal the real history of Kenyans – specifically the Maasai Kingdom and the people of Ma’at, the book was written to hide our royal line ancestries from the Kingdom of Axum (Aksum), the book was written to deny that the Black African Swahili Empire has one of the greatest and oldest histories worldwide, and that Kenyans are not different tribes, but one people. Facing Mount Kenya was written to establish a new race of people called the Agikuyu whose roots are intricately tied in and knotted with the Europeans – a foreign race that came into Kenya to dominate it for it’s resources. But in order to do this they had to break down and disrupt the dominant tribes who lived in what is popularly referred to as the Kenyan or White Highlands – the Maasai, or the People of Ma’at had to ‘go’. Secondly, the British had to implant and instill pseudo-clones for the continuation of the extraction of the resources that are found within these lands.

But I’m moving too fast – I think…

First, let us understand how this book came into being from a man who was not a born writer but whose career began as a parking ticket clerk. eh.

Jomo Kenyatta was born between 1891 and 1897 when East Africa was in the control of the Imperial British East Africa Company (IBEAC) – a trading company whose top agenda was profiteering. IBEAC was the administrator of British East Africa which was the forerunner of the East African Protectorate and later yet, Kenya. The IBEAC was a commercial association founded to cultivate trade in the areas controlled by British colonial power. Created after the Berlin Treaty of 1885, which brutally annexed and divvied up Africa rather like a Pizza Inn pizza – IBEAC was led by that most awful of men, William MacKinnon, who built upon his company’s trading activities in the region with the encouragement of the British government through the granting of “imperial charter” — although it remains unclear what this actually meant, but, it “granted immunity of prosecution to British Subjects whilst allowing them the right to raise taxes, impose custom duties, administer justice, make treaties and otherwise act as the authority of the area. (Oliver, Roland (March 1951). “Some Factors in the British Occupation of East Africa, 1884–1894). In other words, in the History of Kenya, despite the murders of millions of Kenyans, only one white man was ever persecuted and given capital punishment for the deliberate killing of an African.

“The British subjects, have immunity of prosecution.” To Date.

ALKEBU-LAN. Where did Kenya’s Empires vanish to?

Before the conference, European mercenaries and missionaries who were in truth undercover mercenaries, treated African indigenous people in the same contemptuous manner as they had done the New World Natives – by forming trading relationships with indigenous chiefs. In the early 1800’s, the search for ivory in Africa which was then often used in the production of luxurious products – including dentures – led many white traders further into the interior of Africa. However, with the exception of trading posts along the coasts, the greater interior of the continent was essentially ignored during this period. (Muriel E. Chamberlain, The Scramble for Africa (1999).) IBEA was a conglomerate that did not care about the humanity of the East African peoples. Our ancestors existed as commodities of profit – either as beasts of burden, laborers, or curiosities collected for study in Scientific Zoos. All servants and slaves born were noted in the diaries of the administration and each had a price on his head – this then, was imperial privilege.

While in his early thirties, Johnstone Kamau joined the Kikuyu Central Association (KCA), a political organization that strove to make the British administrators in Kenya understand colonialism’s destructive impact specifically on the Kikuyu people. (Shaw 1995). In particular, the KCA raised attention for the grievances caused by land alienation for in their eyes, as long as the Europeans continued to grab what they called ‘Kikuyu Lands’, the KCA argued that the Kikuyu would be unable to develop into self-governing modern subjects.

However, being racially-ethnic based and founded on patriarchal philosophies, the KCA Koc’s (Kikuyu’s Only Club) did not have much impact within the colony itself as the Kikuyu tribe was a minority within the protectorate. Kenyatta’s interest in politics only began from his friendship with James Beauttah, a senior figure in KCA and one of the founders. Beauttah took Kenyatta to a political meeting in Pumwani, but, afraid to disrupt his lucrative employment, Kenyatta refused to make a commitment to the organization. Meanwhile, political upheavals occurred across Kikuyu land following World War I. Among these demonstrations against the British Empire were the campaigns of the brilliant Harry Thuku and the East African Association which resulted in the British government massacre of 21 Native protesters in March 1922. Kenyatta though, was visibly absent.

In either 1925 or early 1926, Beauttah moved to Uganda. When the KCA wrote to Beauttah and asked him to travel to London as their representative, he declined, but recommended Kenyatta—who had ‘a good command of English’—to go in his stead. Kenyatta accepted on the condition that the Association matched his pre-existing salo, which they did, and voilà, Kenyatta thus became the group’s secretary and shipped himself off to London.

In London he initially sought shelter with the Scottish missionaries for their ways were familiar to him, but the same predicaments that had dogged him in Kenya soon followed in London. His troubles began when the missionaries completely withdrew their support once they learned about Johnstone Kamau’s sexual relations with European women outside of marriage, his communist sentiments and his habitual drunkenness. (Ibid.). The mission societies within Kenya had also begun to take a firm stance against Kikuyu female circumcision, which Johnstone Kamau was violently against as he advocated pungently for female circumcision. (Berman 1996: 318-319).

Homeless in London, Kamau subsequently went bowl-begging and reached a compromise with liberal imperialists, who introduced him to the British Education system “…in order to improve his language skills..”. However, he realized that the liberal imperialists were only primarily concerned with extending British colonial power in to Kikuyu land, and understood that his agenda and their plans were irreconcilable (Ibid.: 320). Finally though, at 45 years of age, his windfall changed for the better when he met Bronislaw Malinowksi in December of 1934.

About The Russian, Bronislaw Malinowksi

A sector of East Africa’s population had long fascinated the anthropologist Malinowski specifically because of their fierce rejection of Christianity which was based on the principal that they had their own indigenous cultures which were based on an intricate system of philosophies and beliefs. Malinowski had tried often to organize a fieldwork programme in Kenya to study different tribes, but he had never managed to pull it off. Now that Johnstone Kamau was in London, Malinowski jumped on an opportunity – in short shrift, Johnstone Kamu was enrolled in the department of Social Anthropology at the London School of Economics where Prof. Malinowski taught. Soon, an intimate pupil-instructor relation formed between the pair. At the end of his Studies at the London School of Economics, Johnstone Kamau wrote a thesis in which he propagated Kikuyu customs and traditions as fact . He used the names Jomo Kenyatta, Jomo meaning the sound akin to when withdrawing a sword from it’s sheath, and Kinyatta, the Kikuyu name of a belt worn by Maasai.

The book was an edited version of the thesis which became ‘one of the first modern ethnographies written by an African’. Malionwski had achieved his objective! Both Jomo and Malinowski had very large stakes in having the thesis work accepted as academically ‘pure’ and ‘value-neutral’ (see Pels 1999: 109), but in truth, Jomo was not a writer and at 45 was more interested in politics and less in anthropology. His aim was largely to maintain what he called ‘Kikuyu Lands within a Kikuyu Majority’ – the freedom of other peoples of Kenya from colonial rule was never a part of his ambition.

At the time, Malinowski praised Jomo’s work for it’s lack of political purpose and its scientificity but in reality, Facing Mount Kenya was not at all written ‘without any passion or feeling’ and it certainly did not present the facts objectively – it was a political manifesto against British imperialism in ‘Kikuyu Lands’ and it was masqueraded as a cultural-historical analysis. (Akker, M.L. van den Title: Monument of Nature, An ethnography of the World Heritage of Mt. Kenya Issue Date: 2016-05-25)

I live in Kenya above the Equator and there are problems with land use and utilization with many tribes being cheated out of their lands by international 'CONservation' NGOs. I do the PR, research, and writing for our group.

I coined this term #womb-man to shout out to all womb-men, for we are "men" or human - with wombs - our girls, our mama's, our aunties, grandmothers - for our wombs are not only special, they're also at the #core of our triple gates - 1 our physical well-ness, 2 our soul well-being and 3 our spiritual progression. As womb bearers, we literary LIVE a-round our #wombs, and thus it is imperative to acknowledge this beautiful inner core of our beings.

I'm also the #creator and host of #TheMaa'ituPodcastShow - please go ahead and have a listen in, I have shared the website below.. 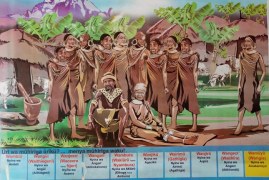 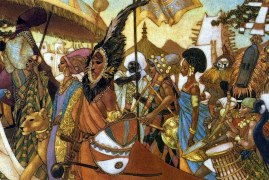 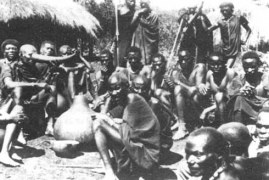